Lawmakers returned to Jefferson City this week to continue the extra legislative session called by the governor to reduce income tax rates and address agricultural issues. The income tax proposal decreases our state’s top income tax rate from 5.3% to 4.95% in 2023 and incrementally to 4.5% in the following years, contingent upon meeting several general revenue growth triggers to ensure our state remains fiscally responsible and able to support vital services and programs. Senate Bill 8 extends several agricultural tax credits until 2028 and creates new tax credits for ethanol fuel, biodiesel production and retail sales and urban farming operations. Both measures passed the Senate and are now being considered by the House.

The constitutionally required veto session convened last week, and since neither chamber took action to override the governor’s vetoes, it concluded on September 21.

You Are Worth the Battle

September is National Suicide Prevention Month, so I wanted to bring the crisis of veteran suicide to your attention and emphasize the importance of lending a hand to a veteran in need. Missouri is consistently above the national average for veteran suicides, and in 2019, the Department of Mental Health reported 17% of our state’s total suicides were at the hands of veterans. To decrease these alarming rates, the Missouri Veterans Commission launched the “You are Worth the Battle Campaign” to educate Missourians on how to identify and help military members and their families during a mental health crisis. If you see, or even suspect, a veteran is in crisis, call 988 immediately to connect to a professional who can help.

Be Prepared for the November Election

The last day to register to vote for the General Election is October 12, so please take a few minutes to make sure your information is updated. Voters are also required to show a valid ID to vote, so apply now for a free, nondriver’s license to present at the polls by calling the Missouri Department of Revenue at 573.526.VOTE or by visiting their website. The Department of Health and Senior Services will supply a free birth certificate to those who wish to obtain a photo ID to vote, and the Secretary of State’s office will help you collect the documentation needed to apply. Voters without a photo ID may still cast a provisional ballot.

In September of 1937, a group of citizens concerned about overharvest and the decimation of our resources created the state conservation agency. The same year, President Roosevelt signed the Federal Aid in Wildlife Restoration Act, also known as the Pittman-Robertson Act (PRA). Eighty-five years after its inception, MDC still relies heavily on funding from the PRA for its habitat management, wildlife research and native species restoration programs. This funding also covers hunter education training and certification and management of natural and conservation areas.

Are You Disaster Ready?

One of the observances in September is National Preparedness Month, so the Department of Commerce and Insurance is encouraging residents to have a plan in place, before the next disaster strikes. Our community is all too familiar with the importance of being prepared for the unexpected, so please initiate a conversation with your family, review the home inventory checklist and practice what each family member will do in case of fire, tornados and earthquakes.

The Missouri Department of Natural Resources is hosting a photo contest through October 1. Amateur photographers are encouraged to submit pictures of our state’s natural bounty in one of the three categories: natural resources, unique places in Missouri State Parks, and people enjoying Missouri’s outdoors. Winning photos will be showcased at the Missouri State Fair and shared on the department’s website and social media channels.

Congratulations to the staff and students at Eugene Field Elementary School for being recognized as a National Blue Ribbon School by the U.S. Dept. of Education. The program honors individual schools for outstanding academic achievement or for efforts toward closing academic achievement gaps. As one of seven Missouri schools to be named, I commend the entire Webb City community for this honor and symbol of exemplary teachers and excellence in education. 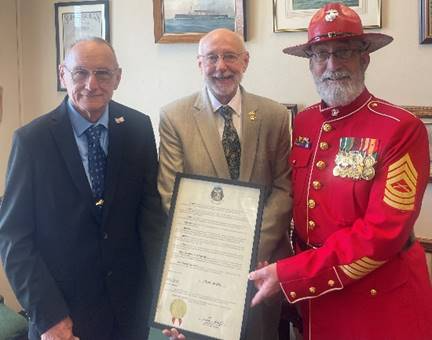 The Toys for Tots program, facilitated by the U.S. Marine Corps Reserve, has been spreading holiday cheer to underserved children for 75 years. To mark the anniversary, local chapters visited the Capitol to attend the proclamation signing ceremony in the governor’s office. I was proud to present resolutions to both the Jasper and Newton county chapters. Please support their efforts and donate toys to the deserving children in our community. 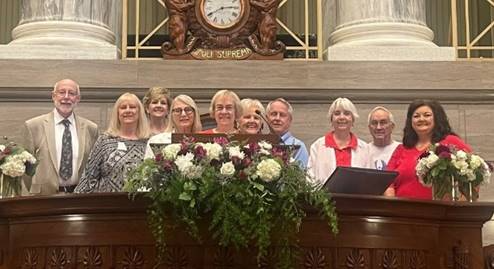 To coincide with the beginning of the extra legislative session, advocates held a rally in the Rotunda on the topic of taxes. I was happy to meet with members of the Jasper County Republican Committee who were in Jefferson City to attend the rally and speak with legislators. 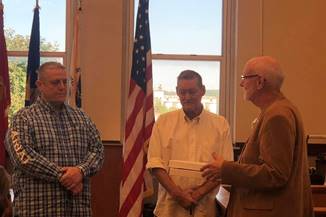 On September 12, I was honored to attend the graduation ceremony for two veterans who recently completed Jasper County’s Veteran Treatment Court, a court-supervised, comprehensive treatment program and alternative sentence to incarceration. This program is designed to meet the specific needs of veterans and address their behavioral health issues, including unemployment, substance use and homelessness.

The VFW Post in Joplin also recognized the contributions of Judge John Nicholas and presented him a plaque, challenge coin and certificate for successfully spearheading the program and giving veterans a second chance.

On September 18, I enjoyed taking part in a ceremony unveiling a new mural in Joplin. The Downtown Black History and Performing Arts Mural depicts jazz musician and Joplin native, Charles McPherson, and ten other African Americans who were born or performed in Joplin during segregation. What a great addition to our community’s robust art scene!

(Joplin, MO) – Nick Edwards, City Manager for the City of Joplin, is pleased to announce that Dan Pekarek has accepted the position of Assistant City Manager. Pekarek has been with the City for 34 […]

The nonprofit world is constantly changing. Make sure you stay up to date on the latest laws that could affect your nonprofit with insights from BKD CPAS & Advisors: SVOG Funds Still Available; Approval Is […]