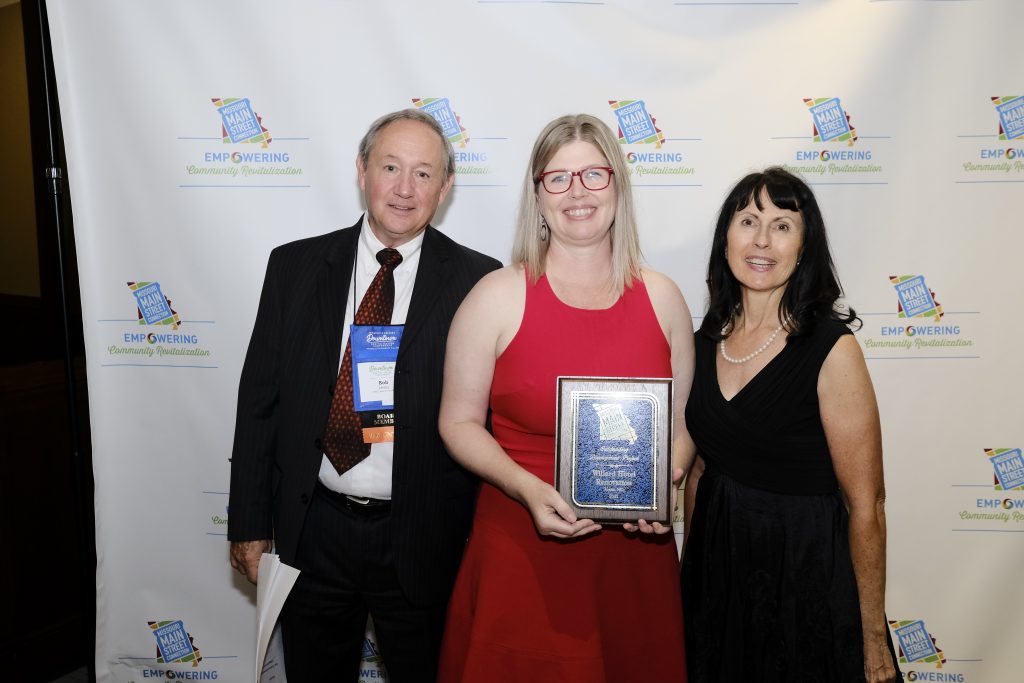 Missouri Main Street Connection is the leading statewide nonprofit organization devoted to preservation-based economic development. Through the Main Street America™ movement and our partners, we empower community revitalization by celebrating, supporting, and sustaining Missouri historic commercial districts in both rural and urban settings.

MMSC is proud to announce that we have been celebrating one billion dollars in public and private investment in Missouri Main Street districts. This milestone was reached at the end of 2021. In addition, Missouri Main Street communities have created 5,069 net new jobs and 1,068 net new businesses from 2006 to 2021.

The ceremony honored communities, individuals, businesses, and organizations from across the state that have completed exemplary work in downtown revitalization. Competitive nominations were submitted for projects, activities, and individuals in 16 different categories that covered aspects of design, economic vitality, organization, promotion, and other efforts in downtown revitalization.

Downtown Joplin Alliance applied to the 1772 Foundation to conduct a feasibility study to establish a revolving fund to help address some of the vacant property issues. After the feasibility study determined that Downtown Joplin Alliance had the capacity to manage this program, $100,000 was awarded to fund the Endangered Properties Program specifically for intervening in historic properties that are deteriorating and have questionable futures. The first property for the program was
the Olivia, which was a much larger project than expected for the program’s first venture. The property was donated to Main Street, a developer was secured, and plans were being drawn up when a devastating fire destroyed the roof and fifth floor of the building. A new developer was secured and currently the building is under construction with projected completion of 40 new apartments in mid-2023. The city stepped in to help with the roof replacement instead of having to fund a million-dollar demolition bill from the fire. This project was a win-win for the city, developer, neighborhood, and the community.

The Endangered Property Fund is currently working on the 1911 Union Depot that has been owned by the Missouri Department of Natural Resources for decades. Downtown Joplin Alliance has entered a contract using the Endangered Property Program to market the Union Depot for redevelopment and includes a structural analysis and listing the building with a realtor for nationwide exposure. This program has given the community another tool in the toolbox to save and rehabilitate historic properties in Joplin.

Joplin Little Theatre (JLT) is preparing for a month of fun, and sometimes spooky, events! October will feature several activities, including a trunk-or-treat event, a high school showcase, and auditions for their upcoming holiday show. […]

(Joplin, MO) – Since its opening in 1997, Children’s Center of Southwest Missouri has served more than 19,000 victims of child abuse. Although the world seemed to stop in 2020, child abuse did not. The […]

There’s a Greek proverb that says: “A society grows great when old men plant trees whose shade they know they shall never sit in.” Here in the U.S., it’s estimated that over half of the […]