Katie Fields, a consultant for SBDC, was named among the top six members for the highest number of training sessions held. The organization also named her as one of two Rookies of the Year; the award recognizes the achievements and professionalism of SBDC team members within their first two years.

Ken Surbrugg, director of the Center for Entrepreneurship at Missouri Southern, was among four SBDC members honored for the highest client satisfaction.

Overall, the SBDC program at Missouri Southern was a recipient of the Overall Performance Center Award, which goes to programs offering creative approaches to serving clients, building relationships with stakeholders, and working to enhance the Missouri SBDC presence in their region.

The Missouri SBDC at Missouri Southern is part of a nationwide network of SBDC programs and is affiliated with and sponsored by the Robert W. Plaster College of Business. It has provided training for owners, managers and employees of area businesses since 1987. It offers one-on-one counseling at no charge to area for-profit small businesses, whether they are existing businesses or start-up companies. 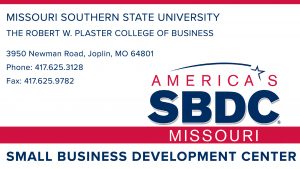 By Kenneth Surbrugg, Director of the Center for Entrepreneurship at Missouri Southern State University “Not every student will become an entrepreneur. But they will all someday need to think like one.” – John Spencer What is […]

By Kenneth Surbrugg, Director of the Center for Entrepreneurship at Missouri Southern State University “Do something today that your future self will thank you for!” – Unknown It’s that time of year where we start moving […]

The Missouri Small Business Development Center (SBDC) hosted at Missouri Southern State University (MSSU) will be holding several trainings throughout this month. Sign up for one today! The Nanette Philibert Business of Art Symposium Wednesday, November 3, 2021 | […]