Now that the opening formalities are over and a multitude of bills have been referred to committee, it’s time to tackle legislation and start scheduling public hearings. The Senate committee I chair, Seniors, Families, Veterans and Military Affairs, has had 10 proposals referred so far, and our first hearing is scheduled next week on Jan. 19.

One of my priority pieces of legislation this session, Senate Bill 669, was heard by the Governmental Accountability and Fiscal Oversight Committee on Jan. 13. The bill makes needed changes to our current tort laws to ensure fairness in the allocation of fault among multiple defendants, as well as protection for the original designer or manufacturer of a product from liability from injury caused by a product produced by a third party that is similar, or is a non-authorized copy of the original product.

On the open day of session, the women of the Missouri Senate debuted a new children’s book titled, You Can, Too! The goals of this collaborative effort are to increase literacy, inspire girls to serve and highlight the record-breaking number of 11 women senators serving in the 101st General Assembly. The book follows the unique path each of our state’s 36 female senators have taken on their journey to the Missouri Senate. Contact my office to purchase a book.

The office of Missouri’s attorney general offers several important services to protect consumers and combat fraud. If you need to file a complaint, want to join the no-call list or suspect Medicaid fraud, here are the numbers to call:

To applaud and honor first responders who sustain serious, long-term injuries in the line of duty, Missouri will now present these heroes with a new Red, White and Blue Heart Award. If you know of a peace officer, firefighter, paramedic, EMT or emergency responder who was severely injured, or even killed, while trying to help others, nominate him or her for an award.

K9s on the Front Line in the Senate Chamber 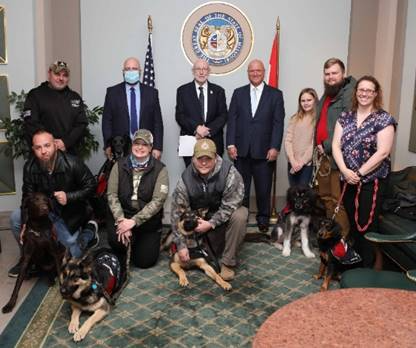 I had the honor of meeting some loyal K9s with their handlers and introducing them on the floor during their visit to the State Capitol on Jan. 11. The nonprofit “K9s on the Front Line” provides free, fully trained PTSD service dogs to combat veterans in need.

On January 6, I was honored to introduce Dr. Douglas Frank on the floor of the chamber following a rally in the Rotunda and a meet and greet in the office of Rep. Ann Kelley. Doctor Frank is a physicist, inventor, professor, and Nobel Peace Prize nominee who has been analyzing the 2020 election and election vulnerabilities. 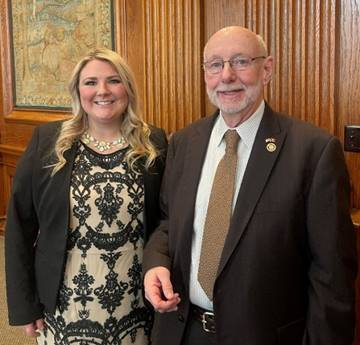 One of the roles of the Senate is to conduct hearings to confirm those seeking an appointment by the governor to serve on a state board or commission. More than a dozen confirmations were made on Jan. 12, including Jeanee’ Kennedy of Seneca, who has been appointed to the State Board of Nursing.

Welcoming Advocates from Our Community

I truly enjoy welcoming members of our community to the Capitol and hearing their perspectives on various issues. Below are a few highlights from the past week.

Christmas Time Is Here One of my favorite holiday classics is A Charlie Brown Christmas. I was a young teenager when it first aired on television in 1965, but every year, I look forward to […]

(Diamond, MO) – Following guidance from the White House, Centers for Disease Control and Prevention  (CDC), and state and local public health authorities, Storytelling Day events will not be held in person this year. However, […]