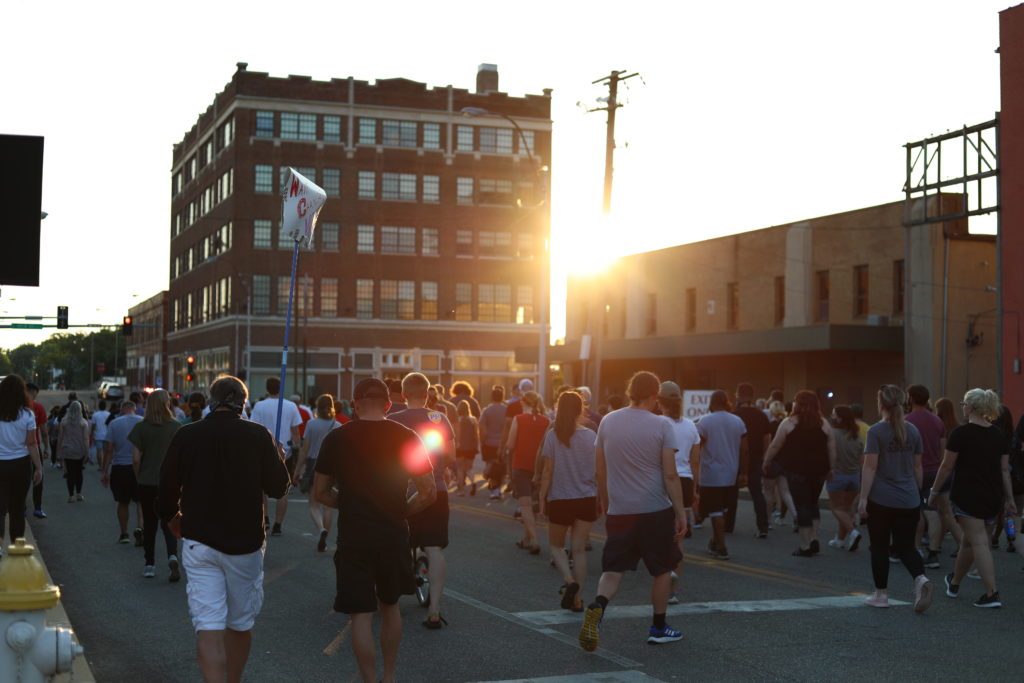 (Joplin, MO) – Organizers with the Joplin Area Chamber of Commerce’s Equity, Diversity & Inclusion (EDI) work group hosted a Silent Solidarity Walk on Monday, June 15 to remember the past and present struggles of Joplin’s Black residents while also committing to make the community.

This commitment began at City Hall where the City Council adopted a new proclamation written by the EDI work group. It defines terms like diversity, belonging, and inclusion while encouraging residents to make Joplin a more welcoming community, where diversity is celebrated and embraced.

“This proclamation has been a goal of the EDI work group for several months,” explains Carolina Neal. “And we feel that this is incredibly significant for our community, especially considering the circumstances our country is facing.”

Following the proclamation, the group honored the past and present prejudices that Black in minorities in Joplin have faced. In the wake of George Floyd’s murder, Sergio Rizo, co-chair for the EDI work group, felt that the walk held an important and symbolic meaning for people of color in Joplin and around the world.

“We want this walk to be silent, because words seem hollow, because anger and hurt runs deep,” he explained to the crowd of marchers. “The journey before us is long, we are resolute in change, and we’ll be doing this together.”

Starting at City Hall, a group of around 100 participants walked to the old Fox Theater, which now houses the Central Assembly Christian Life Center. Rizo explained the history of the former movie theater, noting that when it was built, a balcony was excluded from the building’s design so that Black residents would be denied admission.

Participants observed eight minutes and 46 seconds of silence to honor the life of George Floyd. Afterwards, Chris DeWelt of College Heights Christian Church and Kathyrn Wilson of South Joplin Christian Church led the group in prayer before the walk continued to the corner of Second Street and Wall Avenue.

Walking next to 2nd and Wall Street, Rizo then shared the story of Thomas Gilyard, a 20-year-old Black man who was lynched at that location on April 15, 1903 after being accused of killing a police officer.

“For Gilyard, there was no justice as he was hanged by a mob of people who broke into the city jail, dragged him from his cell, and hanged him in the street in broad daylight,” said Rizo.

To close out the evening, Langston Hughes’ “Let America Be America Again” was read in remembrance of the injustice felt by so many and in aspiration of the resolute change desired by so many more. The event ended with these final lines:

“America never was America to me,

And yet I swear this oath—

Out of the rack and ruin of our gangster death,

The rape and rot of graft, and stealth, and lies,

We, the people, must redeem

The land, the mines, the plants, the rivers.

The mountains and the endless plain—

All, all the stretch of these great green states—

Read “Let America Be America Again” by Langson Hughes in its entirety at poetryfoundation.org/poems/147907/let-america-be-america-again.

Those who wish to read the diversity and inclusion proclamation can view it at  joplinmo.org/AgendaCenter/ViewFile/Item/6400?fileID=33676.

For those who would like more information on the EDI work group, please visit joplincc.com/improve-livability/diversity-inclusion/ or contact info@joplincc.com to learn how you can get involved.

(Joplin, MO) – Connect2Culture (C2C) regularly collects information on upcoming Arts, Culture, and Entertainment events in the Joplin area. This is the most recent information that C2C has received or collected for March 2021. Other listings could be […]

(Joplin, MO) – Freeman Health System is holding Daffodil Days to help support cancer patients in need. The daffodil is a symbol of hope as a spring flower and marks new beginnings in a patient’s […]