Working Toward a Legislative Five by Five

The military term, “five by five,” refers to transmitted signals that receive perfect “5” scores based on the signal’s strength and clarity, more commonly known as “loud and clear” or “I understand you perfectly.” Senators strive to communicate their messages loud and clear during deliberations and debates in the chamber. By perfecting my Senate Bill 823 on March 29, I believe we sent a strong, five-by-five message concerning some of Missouri’s most vulnerable children and families. This measure provides direction and clarity to the Children’s Division regarding the implementation of the federal Families First Prevention Services Act, and it authorizes the division to appoint a qualified individual to represent a child in the family services system who has been removed from their home and placed in residential care. This individual may access all of the child’s records, assess the child’s needs and recommend the appropriate next steps to the juvenile court to minimize trauma, limit the use of residential setting placements and keep the child safe.

On March 30, I presented Senate Bill 1133 to the Senate Seniors, Families, Veterans and Military Affairs Committee. This bill protects pharmacists from disciplinary action for filling a prescription for ivermectin or hydroxychloroquine and prevents them from having to inquire of the drug’s use. This committee also voted to pass my proposal to make it a felony offense to import or traffic abortion-inducing drugs and devices, Senate Bill 1178.

Since the Senate Independent Bipartisan Citizens Commission did not submit a redistricting map for Missouri’s 34 senatorial districts, the difficult task was taken up by judges serving on the Judicial Redistricting Commission. The map moves Dade County to the 20th Senatorial District alongside Barton, Webster and part of Greene County. The 2020 census data indicated substantial population growth in both Jasper and Newton counties, which explains why Dade County will join a new district when the 102nd General Assembly convenes in 2023. While I’m sad that I will no longer represent the great people who reside in Dade County, I will not be a stranger, as I plan to continue attending events, such as the Christmas tree lighting in Lockwood and Buffalo Days in Greenfield. I’m thankful for the opportunity to continue to represent the residents of Jasper and Newton counties in the Missouri Senate.

Has your family owned a farm since December 31, 1922? Consider applying to be recognized as a Missouri Century Farm through the Department of Agriculture. The farm must consist of at least 40 acres of the original parcel which contribute to the farm’s overall income. For more information, click here.

Community Resources at Your Fingertips

The Department of Health and Senior Services updated their helpful community resources site last month. With one click, you can access the contact information to a variety of services and programs in your county, ranging from housing to health care to crisis centers.

Senior citizens may want to bookmark the Missouri Senior Legal Helpline for information and assistance regarding power of attorney, living wills and other civil legal issues. You may also call the helpline at 800.235.5503.

Roll Up Your Sleeves for Red Cross Month

During the month of March, the Red Cross of Missouri and Arkansas is honoring the volunteers who make their mission possible. The observance was officially established by President Franklin Roosevelt in 1943 to commend those who volunteer their time, complete a lifesaving skills course and donate money or blood. Call 417.832.9500 for information on how to donate or volunteer.

Congratulations are in order for two young leaders from our community who have been selected to represent the Southwest District in the 2022 Missouri Agribusiness Academy, Carthage’s Kallie Cloud and Neosho’s Maelyn Wright. This summer, Kallie and Maelyn will join the other members of the 2022 class and visit Missouri’s agribusinesses, learn about educational opportunities and meet with statewide agriculture leaders, before closing out their tour in Jefferson City. 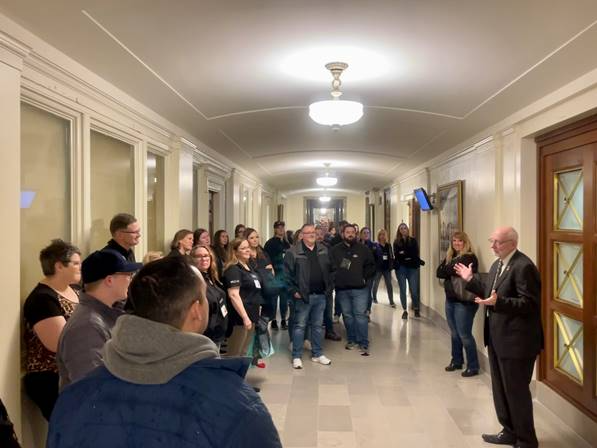 On March 30, I enjoyed visiting with members of Leadership Joplin, a program developed by the Joplin Chamber of Commerce and sponsored by our community’s businesses. Leadership Joplin works to identify, cultivate and motivate future community leaders through curriculum designed to prepare them for the challenges they may face in the future. 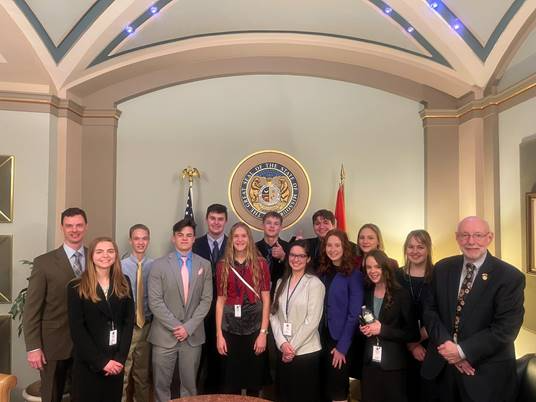 On March 28–31, members of TeenPact Missouri attended a four-day class in Jefferson City to learn about the legislative process and embrace their call as the next generation of leaders. During the workshop, students run for office, participate in a mock legislature and learn how to be effective, Christian leaders in their home communities.

Project work along West 32nd Street originally scheduled for the week of May 2, 2022 has been delayed due to weather. Please note that construction will begin Monday, May 9, and will impact traffic flow […]

(Joplin, MO) – During the public health pandemic, the City of Joplin has held regular briefings to provide important updates for news media and the general public. City officials will continue to hold this news […]