The first half of the 2022 legislative session will conclude March 4, so I was honored to present six more of my bills in hearings. On February 28, I presented Senate Bill 937 to allow all counties with less than 75,000 residents to follow different procedures than the Missouri Supreme Court rules for a change of venue and to reduce the unnecessary strain on smaller counties that only have a part-time prosecutor and support staff. I also presented Senate Bill 938 to modify assistant physician licensing. This measure will restrict licensing applications to only those who graduated from an accredited North American medical school and provide more opportunities for Missouri’s medical school graduates to find a residency match to complete their degree.

To kick off the month of March, I presented Senate Bill 939 to align our state’s current language regarding background checks for certain staff at medical marijuana facilities with the FBI’s national standards. On March 2, I presented Senate Bill 824 to the Senate Committee on Commerce, Consumer Protection, Energy and the Environment to permit electricity customers to subscribe to a community solar project and receive a credit on their electric bill. After the hearing for SB 824 concluded, the committee voted my public utility rate adjustment, Senate Bill 756, do pass. I also presented Senate Bill 671 to add neglect to our state’s abuse statutes and establish the Essential Caregiver Program Act to allow a patient to designate an in-person contact or caregiver during a governor-declared state of emergency. Finally, I presented my election integrity bill, Senate Bill 670, which was filed at the behest of the secretary of state and will require hand-marked paper ballots, among many other provisions to strengthen our election security.

The deadline to file legislation this session was March 1, so I am thankful to add Senate Concurrent Resolution 34 to my list. This resolution encourages Congress to include the Newtonia Battlefields in Newton County with Wilson’s Creek National Battlefield in the National Park Service to preserve its significant place in history. Similar legislation has been filed by Missouri’s members of Congress in Washington, D.C., so I’m honored to be the boots on the ground to advance this proposal in the Missouri Legislature.

On February 24, the General Assembly appropriated and the governor signed a supplemental budget bill to allocate funds to early and K—12 education, public safety, telehealth services, and pay raises for our hardworking state employees. The money is from federal COVID-19 relief and stimulus funds passed by Congress last year.

What an honor it was to speak to members of the Missouri State Medical Association (MSMA) as they convened at the Capitol on March 1 for the 2022 White Coat Day. I highlighted several legislative proposals that will benefit the medical community, and cautioned the members about a few others. One of the attendees was a VIP guest, Dr. Ellen Nichols, my better half and a surgeon at Freeman Health System in Joplin.

If you know of a graduating young woman who would benefit from a one-time $1,000 scholarship to apply toward college expenses, encourage her to apply for the Women Legislators of Missouri scholarship. Candidates may apply online and submit a 500-word essay answering the question, “If you were a state legislator, what would you hope to accomplish, and why?” The submission deadline is March 24. The caucus will select recipients and hold a reception at the State Capitol in their honor on April 25, 2022.

Welcoming Members of Our Community to Jefferson City 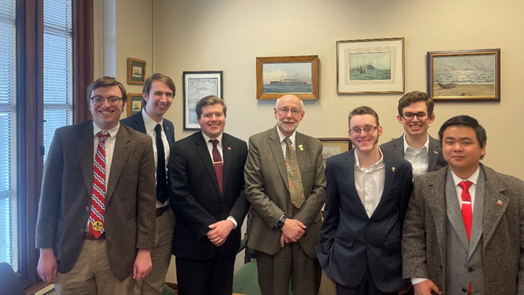 College Republicans at Truman State University visit with Senator White in his Capitol office. Carthage’s Elisa Burrough, standing to the left of Senator White, is a past president for the organization.

The Missouri Ambulance Association held the 2022 EMS Day at the Capitol on March 1. I was happy to introduce them on the Senate floor and spend a few minutes learning about the issues and needs of those “Committing our lives to saving yours.” 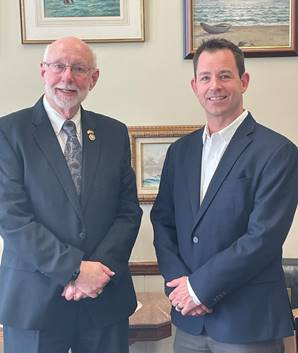 Senator White visits with Dr. John Paulson after he testified in support of SB 938. 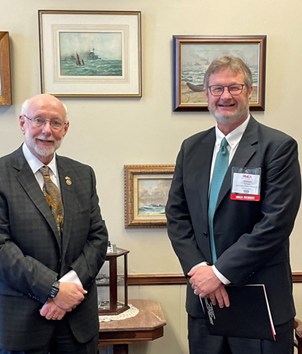 Senator White speaks with Mike Harrison about the Joplin Health and Rehabilitation Center. 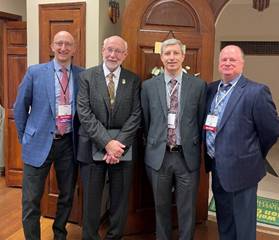 Members of the Missouri Health Care Association, including Stephen Burrish, the administrator at NHC HealthCare Joplin, pose with Senator White during their advocacy day. 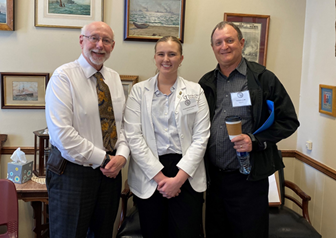 Senator White joins members of the Missouri Trucking Association during their legislative day. Andy Bradford, the third from the right, is a resident of our community who works with Tri-State Trucking.

Don’t forget! March 9 is the deadline to register to vote for the April 5 election.

(Joplin, MO) – Budget planning for the City of Joplin is underway and the Proposed Budget for the Fiscal Year 2023 is available to view on the City’s website.  The City Manager’s Budget Message opens the financial document […]